Lucinda Bell used to wake up on two-and-a-half acres with kangaroos outside her window in Grafton. "Now when I look out, I have a view of the Sydney skyline...it's a bit different."

Miss Bell, 18, was planning to go to university in Armidale or Brisbane when opportunity knocked. She is now studying business and information systems at the University NSW - thanks to a co-op scholarship.

"The scholarship mostly covers my accommodation here, and the program does a lot of industry placements," Miss Bell said. "That's sort of an opportunity I would never have gotten living where I did."

Miss Bell said most of her schoolmates got jobs locally, went to universities in Brisbane or nearby regional centres, or took a gap year. 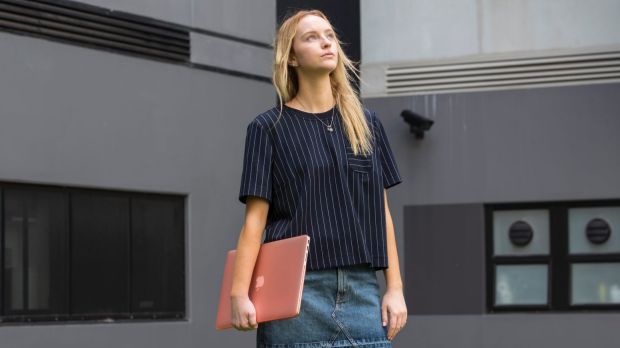 The number of students like Miss Bell moving from regional areas to cities for university has grown by more than 75 per cent. But many of these students are choosing to study in states other than NSW.

Nationally, the number of students who relocated to metropolitan cities from regional areas has increased by 76.3 per cent over five years, from about 29,000 students in 2008 to more than 51,000 in 2014, according to a study funded by the National Centre for Student Equity in Higher Education.

The study, based on new data looking at the address listed by students at the commencement of their degree, also found that, contrary to traditional research, the number of regional students pursuing higher education has grown 38.8 per cent between 2008 and 2014, compared to 33.1 per cent growth across the higher education sector.

"In the second year of university, you might change your home address to your city address," said Buly Cardak, an Associate Professor at La Trobe University and one of the lead researchers of the study.

"We've asked the department to pull out the original permanent home addresses and, when you do that, the story is quite startling."

However, NSW is experiencing an increasing exodus of regional students.

Students from NSW country towns are most likely to move to neighbouring states, with Queensland reporting a net gain of 1955 students originating from regional areas in 2014, the ACT experiencing a net gain of 1923 students and Victoria gaining 1700 students.

"There's this big, ongoing outflow of students from NSW," Mr Cardak said. "The cost of living in Sydney is probably a factor, along with the geography of NSW with big populations in border towns.

"It's a problem for regional areas that are losing students, and there will be a lot of debate around where funding goes in the next six to 12 months."

The number of regional students choosing external study has grown 156 per cent between 2008 and 2014 and those choosing multi-modal options has grown 149.5 per cent, compared to a 63.9 per cent and 71.1 per cent growth respectively across the two alternative modes for all domestic students.

"When we take the data together, we've got students relocating to metropolitan locations because there are more opportunities for them to work while they study," Mr Cardak said.

The findings will feed into ongoing policy discussion at the federal level on increasing regional participation in higher education and funding for metropolitan and regional universities.

"Relocation to the city is escalating and this will have important policy implications for higher education funding," said Matt Brett, an Equity Fellow at La Trobe University and one of the study's lead researchers.