The Global Climate Strike today has people all over the world refocusing their attention on the challenge of climate change both locally, and globally, and asking the incredibly important questions “what can I do? How can I make a difference?”.  Many of us have mastered some simple actions to contribute, particularly in reducing waste; using a keep cup for coffee, taking our own reusable bags for shopping, carrying a water bottle rather than buying bottled water, etc.  But one final year Marketing Co-op scholar, Ben Munro, has taken things a big step further.

Ben will head to the United Nations Framework Convention on Climate Change conference in Chile (COP25) in December as part of a 4 person delegation with Global Voices.  There he will be involved in discussions on renewable energy, circular economies and most prominently, oceans and seas. 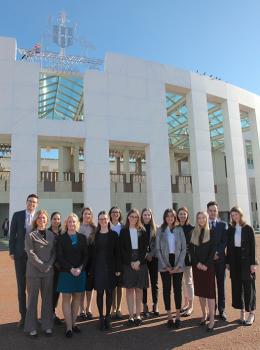 In preparation for this, and to assist the research process for his policy paper “Increase the viability of the renewable energy sector in Australia through better grid management”, Ben spent the Wednesday to Friday last week at a pre-briefing in Canberra with the delegates to COP25(pictured, L-R), as well as those heading to the IMF & World Bank Annual Meeting, and the UN Commission on the Status of Women CSW64. Ben believes that the energy sector is one of the cheapest ways that Australia can lower its emissions, turning us into a world leader in the clean energy space, “Australia is rich with renewable resources and they have now become the cheapest form of new electricity generation. Private investors are ready to jump on the industry, but Australia lacks the infrastructure and policy framework to achieve this”.

Their first full day of meetings began at Parliament House where the group met with Madeleine King, Shadow Minister for Trade and Senator the Hon Richard Colbeck, Minister for Youth, to discuss the future of Australian trade and representation of Australian youth in politics.  Former speaker Anna Bourke gave them an “unofficial tour” of Parliament House, taking them behind the scenes and sharing some insights into the life of a politician, before hitting up Question Time in the House of Representatives - a taste of politics in action.  To cap off day one they visited the American Embassy to speak with the American Ambassador to Australia, Arthur B. Culvahouse Jr. to discuss Australia’s role in the US-China trade conflict and the importance of an Australian and US position in the Pacific. “It was amazing to see the full circle of politics, from ministers, to political staffers, policymakers and ambassadors. There is a whole army of people behind the scenes who we generally forget about, but they are the ones who make sure our country keeps running.” 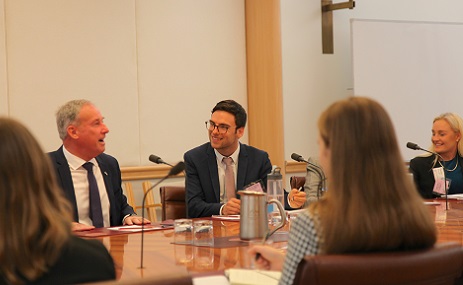 A bright and early start on day two at ANU Crawford School of Public Policy to pick the brains of those in the know and better understand how policies are developed, with a particular focus on climate policy. This was followed by meetings with some policymakers at the Department of Environment and Department of Foreign Affairs and Trade, including Mr Patrick Suckling, Australia's Ambassador for the Environment, who will lead Australia's negotiations at the COP25.  A fantastic opportunity for Ben to gain a greater understanding of the energy sector and how to make his policy politically feasible.

The UN's Emergency Climate Summit will take place in New York on the 23rd of this month, and UN Secretary-General António Guterres has called on all leaders to come with “concrete, realistic plans to enhance their nationally determined contributions by 2020”, the very goal Ben hopes to see his policy contribute to.  Watch this space for more stories from his COP25 journey.